The Middle Place: A different kind of Mother’s Day 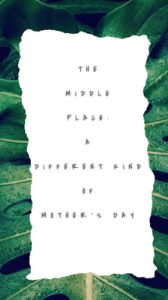 I’m the oldest of three children; one of two daughters. I was the girlie girl; my sister, the tom boy. I had eight million boyfriends; my sister had a total of four, I think. My sister was a badass athlete; competitive with killer instincts. I was, well, not. Like, at all. I could play catch with my dad and not drop the ball but that was the extent of it. I took dance because I enjoyed it and I was a little southern girl so that’s what I did until middle school but it wasn’t my passion. My sister was a hard core, passionate gymnast; when the gym required her to take ballet and wear a tutu, rather than compromise her tomboy style, she quit and took up soccer. And became a goalie. Because she is a freaking badass. I don’t remember feeling competitive with my sister growing up because we are COMPLETELY different people and it never occurred to me that she may do something or have something that I wanted enough to feel jealous of (except attention from our parents which made me crazy jealous as a child. A post for another time.) 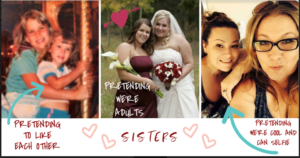 I will never forget her helping me organize my closet one day in my late twenties when she took a deep breath, began to cry, and told me that she was pregnant with my oldest niece. I’ll never forget her telling me that she was sorry that she got pregnant before me because she knew I wanted a baby and I’m the oldest so theoretically I should have gone “first”. It hadn’t occurred to me until then that her being pregnant before me would make me feel jealous. She had the foresight to know it would.  I remember being unbelievably happy for her because she was meant to be a mother; it was in the core of her being, the very DNA of who she is as a person.  But the pang of envy creeped in that day too because, with the exception of being viewed as the “good child” by our parents (see also: being better at hiding the things she shouldn’t have been doing), it was the first time she had something that I really wanted. She was pregnant, effortlessly, and I had been told the year or two before by my doctors that they weren’t sure I’d ever be able to have children myself and I should probably look into adoption. I was happy for her with a twinge of sadness for myself; the first time I realized I could feel two competing  and intense emotions simultaneously. And certainly, not the last.

I’ve had a complex relationship with Mother’s Day for well over a decade. Before I became a mother, I loved to celebrate the moms in my life but also felt left out because I longed to have a child of my own. My first Mother’s Day as a mother was unlike I had imagined it would be because I had lost my first baby, Jackson, three months prior. I had a mother’s heart, loved my baby more than words yet I wasn’t acknowledged as a mother because my baby had died in my womb. I cried in church when all the mothers were asked to stand to be recognized by the congregation and I stayed seated, my heart desperate to be included with the other mothers. By the next Mother’s Day I had lost two more babies and it became cemented as a day that would always have an element of sorrow to it, no matter if I would ever go on to have living children or not. In those years I tucked my motherhood away because it felt desperately isolating to be the only person in my life whose motherhood was questioned and unacknowledged. I would smile for my mom, my sister and my mother in law as I spent time with them while inside I felt like I was suffocating from grief. I sent the “Happy Mother’s Day” texts to my sister in law with tears streaming down my face because I was heartbroken that my husband’s younger sister had a living baby and we had lost three, were pregnant with our fourth, and was terrified I would lose him too.  After Caleb died, I began to hide on Mother’s Day because it felt like a cruel joke to have four babies but none to hold in my arms. We would go to the mountains for a day or two and avoid church at all costs. I felt like I was a horrible daughter, sister, and sister/daughter in law because I could not bring myself to celebrate outside of sending “Happy Mother’s Day” texts. The guilt ate me alive. The only place my motherhood was truly validated was at the cemetery, where I would go to spend time with the one baby I was able to properly bury. It was there, 32 miles from my home, that I was able to be his mother without the judgement or weight of other people’s expectations or opinions. There, in the beauty of the Colorado Mountains, the proof of my motherhood could be found on a headstone. 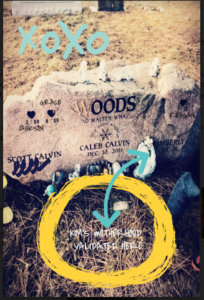 A few years later I stumbled upon International Bereaved Mother’s Day and was both elated and saddened. Elated that someone “like me”, a mother whose baby had died, was being recognized publicly as a mother encouraged me. I felt seen, valued, and validated. On the other hand I was saddened because I wanted to be a “normal” mom, being recognized on traditional Mother’s Day rather than a day set apart from the rest of the moms. I’ve vacillated between the two emotions for years, even after my living children came along, which surprises most people. They think having living children, whether before your loss or after, magically cures your grief. I’ve had countless people stare at me puzzled when I explain that despite having living children, Mother’s Day and International Bereaved Mother’s Day are both tender days for me. Most people seem to understand that Bereaved Mother’s Day would be tender, however they can’t get a grip on why Mother’s Day would continue to be tender for me when I have three, incredible, living kids. 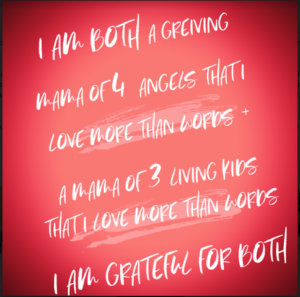 Hear me well, Friends: my children, all seven of them, are three of the greatest loves of my life. I am beyond thankful for them and even on the toughest motherhood days, I revel in the pure joy of being their mama. HOWEVER, comma…  I still have four kiddos that I carry in my heart, not my arms, and even in the midst of gratefulness with three living, I can still grieve the loss of my other four. I can miss my heavenly babes and still be full of joy because their lives are an important part of my life. I can feel the twinge of sorrow of what is missing and elation because of the three whose hands I get to hold, faces I get to kiss, embrace I get to cherish. The competing emotions I feel on both International Bereaved Mother’s Day and traditional Mother’s Day is something I’ve become accustomed to; familiar with. I still don’t go to church on Mother’s Day because it’s a trigger for me, however I’ve embraced my perpetual station in the middle space of the two Mother’s Days. International Bereaved Mother’s Day and traditional Mother’s Day are one week apart and I feel like I eternally exist in the middle of them, not squarely in one camp or another.  I fought that for many years, believing I had to choose between one and the other.  I was wrong. I’ve accepted the competing emotions and duality of being celebrated on both Bereaved Mother’s Day and Traditional Mother’s Day, because:

A grieving mama of four angels that I love more than words.

A mama of three living kids that I love more than words.

Somedays heartbroken by both.

It’s ok to both love and hate Mother’s Day. It’s ok to exist in the middle between two competing emotions, holidays, or schools of thought. It’s ok to have traditions that honor your Motherhood, whether you have children in your arms or your heart or both. It’s ok to not want to do anything on this tender day; to hide from the world and self-protect. It’s ok to want to participate on this tender day, even if it doesn’t feel tender to you. Wherever you’re at, whatever relationship you have with Mother’s Day, that’s the space you occupy on this day and that is perfectly fine. Give yourself the permission and the grace to feel how you feel. It’s your mama’s heart – take care of it in whatever way feels best for you. 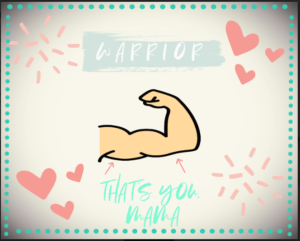