The Littlest Valentines…. and hard questions 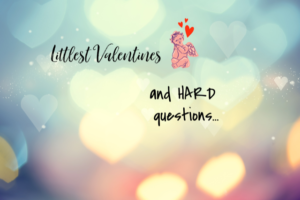 Valentine’s Day is upon us once more. I’m neither for, nor against, Valentine’s Day. I’ve never had much of an opinion on this holiday which, if you know me, you know I rarely don’t have an opinion on things. I don’t remember being bothered by it when I was single and my husband and I have only celebrated it because it was the day we became a couple “officially” (insert eye roll and nauseated emoji here, I totally get it but cut me some slack it was fifteen years ago!).

It wasn’t until my mom started buying little Valentine’s Day gifts for my nieces and, subsequently, my living kids that it gave me pause. It was a reminder that there are four heart shaped boxes filled with candy that are missing. Four little people aren’t here receiving sweet little treats from their Nana. It’s such an adorable gesture that my children’s grandmother sees them as her little valentines, especially since she has never been a big Valentine’s Day person herself. It makes me smile to watch her hand them out to the kiddos and see them light up knowing their Nana thought of them.

Valentine’s Day comes four days after one of my baby’s angelversaries and six days before another one’s. This stretch between the 10th and the 20th of February that includes Valentine’s Day feels very lonely for me. Typically it’s only my husband and I that celebrate and grieve simultaneously the lives of our two littlest valentines that died in February. Most years we never hear from anyone because their angelversaries are either forgotten or not of significance to other people. I used to get riled up and frustrated because no one would mention them to us but as the years have gone on it’s something I’ve just had to accept. No one else is bothered by my being bothered so to save myself some heart ache, I tried to let it go.

This year our first babe, the one who made me a mama, turned 10 years old. The weight of that number is something I’ve written about before and the lead up to Jackson’s birthday this year was intense. I was in a funk; I just couldn’t shake it. I was irritable all week because I knew that despite it being a big year, no one would say anything to us about it and I would be left feeling lonely and hurt. Again. I was preemptively angry and edgy because I knew Sunday would come, our phones would be silent, and I would be hurt and disappointed once more on an already tender day. And that’s pretty much what happened. I was prepared for it. I was pissed about it, but was prepared for it. What I wasn’t prepared for were the hard questions my 8 year old middle child had for us this year as we shivered in the cold, in the mountains, at the cemetery eating doughnuts to celebrate and mourn Jackson. 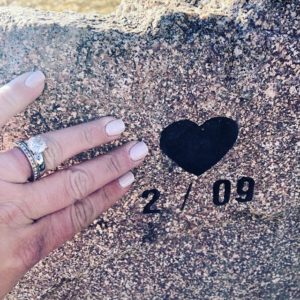 M: Where are the little babies buried, Mom?

Me:  I stumbled through an explanation of medical procedures and made it worse.

M: How could you let their bodies go down the toilet, Mom?!

M: Why doesn’t anyone talk about the little babies, Mom?

Me: I don’t know, you’ll have to ask them. I don’t know.” More sobbing. With the addition of snot and the beginning of ugly cry.

M: Why is Caleb more important than Jackson, Grace and Reagan, Mom?

Me: “He’s not, Love, he was just the only one people got to meet so they tend to focus on him.” Run me over with a bus now,  please.

M: Why isn’t Sissy here celebrating Jackson with us, Mom?

Me: Sissy is hanging out with her boyfriend, Bud.” Eye roll from Middle about my response regarding Big’s whereabouts.

M: Why did all of your babies but one die, Mom?

Me: “Great question, let’s ask for a meeting with God and get some answers when we get to Heaven!” As if this isn’t something I’ve thought about 8.7 million times already

M: Why do you really only have one child since four of them died and Sissy and I aren’t your “real” kids, Mom?

Me: Blank stare, trying to push down anger and hurt while attempting to look totally normal “You and Sissy are our real kids, Buddy.” Middle seems somewhat satisfied with my answers so he turns away to watch a grave be dug a couple hundred feet from where we’re standing. Relief, sorrow and immediate regret at some of my answers wash over me.

One, right after the other, the questions came from Middle. It felt like being shot, over and over and over again. “Make. It. STOP.” I kept repeating in my head while I did my best to filter my facial expressions. Knowing myself, as I do, I can’t imagine I did that well, if at all.

How do you even begin to answer these questions well when you’re sobbing at a cemetery, clutching Little (7 month old) and trying to keep him warm from the insane wind ripping through the trees, staring at a headstone that bears the three little babies’ dates but not names, and seeing a grave being dug in the distance? Hard questions were what I was faced with that day in the midst of the messiness of grief and a doughnut box that refused to cooperate and stop dumping over, spilling its contents on the ground where Elk like to poop. (Mountain life, Friends. It’s a whole different thing.)

Middle is 8 and still trying to understand foster care, adoption, and pregnancy loss while reconciling his own trauma. He tries to love four babies that are his siblings who went to Heaven before he joined our family. He confuses many adults that he meets (including his teachers) because he tries to explain how many siblings he has (including previous foster families) and when someone comments about how big of a family he has he sends a curveball down the middle by letting these unsuspecting people know four of them died. It’s confusing for everyone involved; I’ve become accustomed to the shocked expressions and sincere concern that I may be a murderer and they may have seen me on Unsolved Mysteries at some point.

It’s the first time he’s ever commented about he and his sister not being our “real” kids and that one cut deeply, y’all. I tell ya.  It’s beyond challenging some days to put all of our pieces together; 7 kids, some biological, some not. Some alive, some not. How do we keep it all balanced? How do we keep it all fair where one child isn’t perceived to be more important than the other? Short answer: we don’t. We suck at this part. We try, Good Lord, do we try. I’m constantly assessing to see if one child is feeling less important than the other and trying desperately to keep everything even and make sure everyone feels loved, seen, and not forgotten. It’s a challenge; one I am not quite adept at managing just yet.

The hard questions about our littlest valentines made Jackson’s day a little more tender than normal this year. Middle knows I struggled big time this past week so he offered to use the extra valentines that he’s making for his classmates for Jackson, Grace, Reagan and Caleb. His heart is so sweet sometimes. I still don’t have much of an opinion on Valentine’s Day with the exception of figuring out how to make a Valentine’s Day card box for Middle to take to school because I have all the free time in the land and love doing these types of school projects. (Not really, that was sarcasm. Sorry to all the parents who love doing these types of things, I just can’t get down with them, I find them to be exhausting.) These hard questions and missing our littlest valentines sucks, Grief Warriors. I’m in it all the way with you and am here to remind you that your babies matter, your story matters and that no matter how little the valentine or how hard the question, we can get through it together. Wishing you all a gentle Valentine’s Day. 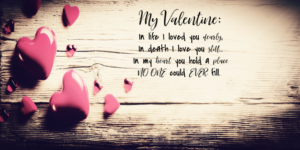