Let go… or be dragged 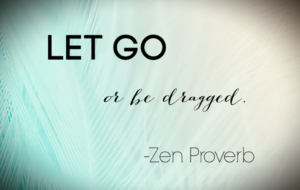 Many years ago, my mother dropped some important parental wisdom on me about teaching your
children to be independent. The conversation came about because I had asked her how my sister,
brother and I were such independent children when I vividly remember other kids having melt downs
when their parents would leave them at school or in the church nursery. I don’t have a single memory of
any of us melting down when they would leave us and it dawned on me that not every kid is like that.
“How did you DO that?” I asked her. She told me that from the time I was born, and subsequently with
my siblings, she began letting go a little at a time so that one day, when it was time for me to leave the
“nest”, I would feel confident enough to do so. So simple. So profound. I looked at her in amazement.
She was so tra la la about it – “it’s hard but it’s necessary,” she told me. Back then it seemed so easy – let go a little at at time. Sounds doable. Go ahead and drop that wisdom, mom, but give a sister some warning that it would be SO DAMN HARD NOW THAT I HAVE LIVING CHILDREN. Wowza. Not so easy.

I’ve said before that one of my children is technically an adult. I HATE that this is, indeed, a factual
statement. I am not ready to let go of her. SHE. JUST. GOT. HERE, people. OK, to be fair she’s been here
for over three years now but it feels like three minutes. I haven’t gotten to do all the things you’re
supposed to do before they’re adults. I haven’t gotten to impart all the wisdom, teach all the life skills,
and get to a place where I feel comfortable letting her go. Ahhh, see what I did there? I made it about
my comfort-ability in the letting go. Never mind that she’s not just a toe over 18 but half way to 20 with a
child of her own. Never mind she’s lived a hundred lifetimes within those 19 and a half years and been to
hell and back. Never mind that when I look at her, I see the woman she’s becoming and the little girl I’m
desperate to hold on to. Never mind that she doesn’t give a damn if I’m ready to let go – she wants to
cut that cord. NOW.

Letting go is a concept that I truly struggle with. Letting go of people, places, and even things… I don’t
have a graceful bone in my body when these things occur. I go down swinging, especially, when it’s
letting go of a person. I fight back tooth and nail. You-will-not-go-until-I-say-you-can-go! Except, life
doesn’t exactly bend to my will in this way. 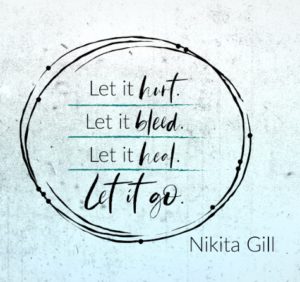 Attempting to hold on to something or someone is exhausting when you’re doing all the work of digging
in your heels in an effort to circumvent the reality that it’s happening. I tried desperately to hold onto
whatever sliver of childhood my daughter had left in her to no avail. She’s done, thank you very much.
She has a license and a car and a child and I no longer have any say so in what she does in her life. It can
be painful… to sit on the sidelines, to not feel needed anymore until a mistake occurs or larger need
arises. THEN Mama gets tapped back in because adulting got to be too much for that moment only to
have the next moment be “I’ve got this, mom”. It’s a vicious cycle. I hate it – did I mention this already?
I digress.

I’ve had to let go of several people that I loved with all of my might because after I lost the angel babes, I was
someone new. Someone they didn’t understand. Our proverbial puzzle pieces no longer fit together and
as desperate as I was to hold on at the beginning, I eventually wised up and let it go. Like that song from
Frozen that gets stuck (indefinitely, it seems!) in your head because Idina Menzel freaking kills it and its, quite frankly, a catchy little tune. I let go because I was tired of being dragged around in relationships
that no longer served me… the NEW me, in my new normal that I never asked for but was forced to
accept anyways.

In the beginning of my grief journey I did as my mom did when I was a baby… I let go a little, teeeeny, bit
at a time. Slowly. Gently. Then the anger set in and I basically set my life on fire for a while. And I threw
all kinds of things I let go of into that fire. Into that garbage dumpster of a fire. That’s a bit rash, you may
scold me. Fair. It was in some cases. However, I couldn’t continue to hold onto my sanity of this
complicated, heart breaking, life after loss while simultaneously holding on to people and things that
took away from it. So I didn’t. I LET IT GO.

I let go of pretending I was OK when I wasn’t.

I let go of bending to other people’s wishes for my grief. And life, for that matter.

I let go of the need to make sure people understood why I was the way I was.

I let go of decades’ long friendships because their friendship came with caveats for my grief that I simply
couldn’t abide by.

I let go of the guilt when I chose to incorporate my four angel babes into my life rather than keep them
hidden to make other people more comfortable.

I let go of feeling guilty when correcting educating someone on their perception of grief, or language
surrounding grief, or judgement of bereaved parents.

I let go of being afraid of what people thought of the way I parent my living kids.

I let go of the idea that my life would ever go the way I envisioned it would.

I let go of apologizing for who I am, what I think, the way I am and how I’ve chosen to put my pieces
back together.

Notice this list does not include letting go of my grief. Despite it being suggested to me more times than
I can count, I’ve never let go of my grief because it isn’t something that can be let go of. Grief is the price
we pay for love and just as I will love my babies until the day I die, I will also grieve for them until the
day I die. This isn’t negotiable, it’s not something that we’ll eventually “tire” of, and if anyone in your life
tells you otherwise, tell them to piss off. Blame me, if you’d like. 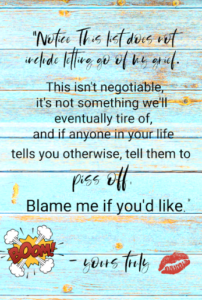 I let go of the things above, rather than be dragged through more pain, because it was familiar for me
to hold on rather than stand on my own. It’s been a process – a LONG, arduous process to get to this
point. And by the way, I still have a LONG way to go in this process. The refining of one’s new normal is a
never ending journey and there are still things that I hold on to that I need to put down. They don’t
serve me anymore, or I’ve grown tired of them, or I don’t have the energy for them any longer. I’ll get
there. I’ll continue to assess and do the work of identifying what needs to go and breathe through the
fear to get to the other side which is freedom. Freedom to be wholly myself and a work in progress; a Mama of seven, Gran of one, a devoted and imperfect wife, a lover of words, travel, farmhouse décor, all the books in the land, and of all things Southern.

What have you had to let go of, Grief Warriors? 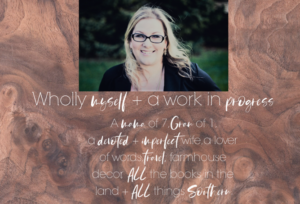