My 8 year old is obsessed with a series of books called “I Survived…” They’re fictional books written in
the context of a nonfiction event such as September 11 th or the Joplin tornadoes. He tears through these
books voraciously, living vicariously through the characters’ harrowing experiences through
unbelievable events. I love that that he’s found a series about survival because in this world, it’s
imperative to know how to survive. To persevere. To keep going, even when it’s more than you think
you could possibly endure. I love that it teaches him persistence and grit because this child needs to
learn how to push through and keep going. We all do. 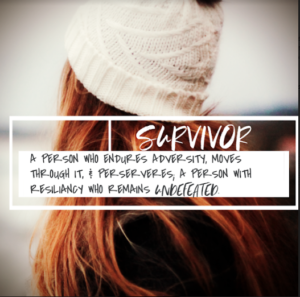 He was reading one of his “I Survived…” books on our plane ride home from visiting my In-Laws
earlier this week and my mind began to wander about what book I would write for this series, if I were
to write one. The subjects they’ve chosen are typically cataclysmic events including tsunamis, the Great
Chicago Fire, the bombing of Pearl Harbor, or Hurricane Katrina. I knew immediately the subject I would choose would pertain to what it has taken to survive the loss of my children which is its own cataclysmic event. I began to contemplate all I’ve survived in the context of child loss and what it would look like as a title of one of the “I survived…” books. 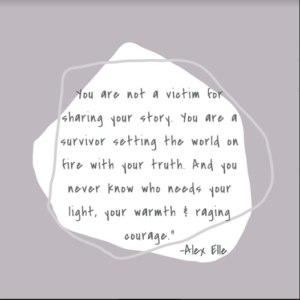 As I made my way down this list I couldn’t help but feel overwhelmed by what I’ve survived. Not
overwhelmed with sorrow, however, but of pride. Pride that I’ve survived that which was
meant to destroy me and I’m not only surviving but thriving. Never, in my wildest dreams, did I believe
that thriving in my post loss world would be a thing. It felt counter intuitive that after losing Jackson,
Grace, Reagan & Caleb that there would be light in my very dark world again. Survival felt primal; digging
deep to the core of my very being to make it through one day to another. It’s been messy… so very
messy… full of missteps, anger, grief, sorrow, heartache, and did I mention anger? It’s also not a
completed journey as society would have you believe. I have survived thus far… I have survived to this
point… and I’ll continue to do so until I join my babes in heaven one day. I’m proud, though, of my
survival and of being a victor rather than a victim. I’m proud as I look back and take stock of how far I’ve
come, messiness and all.

What have you survived in your post loss world? Name it and claim it, y’all! It doesn’t have to be
monumental. It doesn’t have to be huge. Perhaps you survived your first outing at the mall. Maybe you
survived a friend or family member telling you they’re pregnant. Did you survive a 5k in honor of your
baby? Did you survive your first day back at work? Those are all incredible stories of survival, Grief
Warriors! You are survivors of the unimaginable. You are warriors, victorious in the most difficult
battles. I see your survival and I honor its beauty. Carry on, Grief Warrior. Keep. Going.