“Hope is typically considered to be an optimistic state of mind that is based on an expectation of positive outcomes with respect to events and circumstances in one’s life or the world at large.”

I had high hopes for myself as a parent. I believed that I would be more understanding of trauma behaviors because I understood trauma intimately. I believed that I had learned from my friends who had living children before me and saw what worked and didn’t for them. I had practiced parenting on my nieces for years – all was well there. My greatest hope was that none of my children would ever be in a therapist’s office, blaming me for childhood issues that spilled into adulthood. My greatest fear, was that they would.

As we continued to grow our family through adoption, grandparenthood and subsequently a rainbow baby, I began to notice a new anxiety creeping into my consciousness that hadn’t been there previously. I began to wonder (and subsequently obsess and panic!) how I would keep everything and everyone balanced. Not the day to day chaos of having six people in one house with two dogs and a cat, but rather the balance of seven children split between heaven and earth, plus a grandbaby. Our two oldest living children were adopted so we celebrate the day they came to our family as well as their adoption days as “Family Birthdays”. Thus, the two of them get three birthday celebrations (two family birthdays and their normal birthday),  a year. Three times, per kid, per year when we have cake, y’all. You don’t even know how amazing that is! As time went on, I began to wonder if I was doing enough for the angel babes in comparison because they only have a select few things that we do for them and with our livings, there’s obviously a lot more that we do. Then came the rainbow baby.

Once he was added to the mix I began to worry about how he will feel only having one birthday celebration yet his two older siblings get three. I ran out of time to do a birthday party for Middle this year but have never ran out of time to do one for Caleb. Will this completely destroy Middle? Am I adding more layers of issues that therapy will be required to resolve? Am I inadvertently telling Mithrough my actions that I care more about Caleb than him(which is obviously not the case. I love them all equally.)  Big and Middle have already been through the ringer in life, the absolute last thing I want to do is add to that. It’s been my greatest fear since I got the call to go pick up our daughter, the thing I am most terrified of in the entirety of my being.  And guess what? This week my greatest fear, the thing that keeps me up at night, keeps perpetual knots in my stomach, and makes me question every parenting decision/reaction I’ve ever had,  has actually happened.

It was confirmed for me by Big and Middle in separate conversations that I have completely failed at balancing heaven and earth, biology and adoption. Bombed. Shit the bed, so to speak. In a fight for the record books, Big screamed at me about how I treated her when at 16 she got pregnant (not my finest hour, I FULLY admit) and me loving the boys more, especially Little because he’s our biological child. Ouch. That one destroyed me. Middle was less harsh about it but complained that people only care about Little and Grand because they’re babies and he understands why adults do it but even his cousins do it which isn’t fair. Because he’s there for them to play with, and they only want to play with the babies.

After those two unprompted conversations (well one conversation, one screaming match) only hours apart, my heart completely broke. I broke down and cried harder than I had in years. It scared Middle; it amused Big. My heart broke at the realization that I will never, EVER, be able to balance heaven, Earth, adoption and biology. I’m always disappointing someone. I’m always failing someone. If I’m spending time with Little, reveling in his curiosity or taking pictures with him and posting them to IG, I’m upsetting Big because to her that proves I love him more. If I’m taking Big to spend some time with her at the nail shop and leave Middle at home or make him come along and sit there, I’m upsetting Middle because to him I love Big more because she’s a girl and everyone else in the family are boys. If I am holding Little and Grand sees him playing with a toy he likes, I’m upsetting Grand because he WANTS that toy! Then, adding the angel babes to the mix I worry that I don’t do enough for them to feel loved and keep their memories alive. When someone doesn’t remember their names or reach out on their angelversary (despite knowing good and well when it is), does that mean I’ve failed them? I. Can’t. Win. My hope was gone; I was defeated.

All weekend I drove myself crazy, going over every detail of every little thing I’ve done and said to my kids for the past three years. I barely ate. I barely got out of bed. I was angry. Brokenhearted. Sickened at myself for failing the very people I love most in this world. And then on Monday, I woke up and realized that just because something doesn’t happen the way you had hoped it would, doesn’t mean you abandon all hope and accept defeat. You don’t give up. You don’t give in. You hold onto your hope by your fingernails if you must, but you still hold on. I saw a beautiful quote once that said H.O.P.E. stands for “Hold On, Pain Ends”.  I don’t know who said it, but preach on, Brother. That’s exactly what I needed to remember this weekend: Hold on; pain ends. 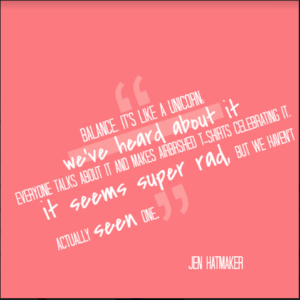 Holding on when you want to give up is unbelievably hard. I’ve experienced each time I’ve lost a baby, experienced it when I learned of my two older children’s’ backgrounds and lost faith in humanity, and found it especially trying when I was pregnant with Little because I was convinced he would die too. I’ve had to re-assemble my hope more times than I can count when life trampled it, again and again. While knawing on my failures like a dog with a bone this weekend, I was reminded of a quote by one of my favorite authors, Jen Hatmaker, who says “Balance. It’s like a unicorn; we’ve heard about it, everyone talks about it and makes airbrushed T-shirts celebrating it, it seems super rad, but we haven’t actually seen one.” A lightbulb went off in my brain and I realized:  BALANCE IS A MYTH, Y’ALL! Balance isn’t reality. Sure you try your best but it’s impossible to do all the things, perfectly, and be everything to everyone, perfectly, all of the time. It’s. Not. Possible. What a relief!

In real time, as in this very moment, I’m re-assembling once more,  my hope of parenthood and raising really great kids who don’t hate me in their therapist’s office. It’s just going to look different now because I’m done berating myself for being unable to live up to the unattainable idea of the balancing act. Balance – what a crock! Be gentle with yourselves, Grief Warriors: we are all doing the best we can. 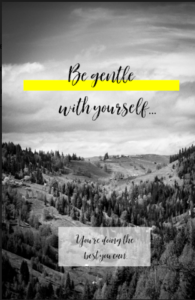