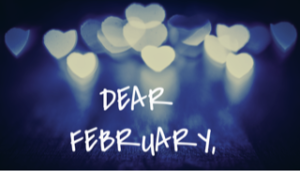 We meet again. Another year, another turning of the page from January to you making my heart grow anxious and heavy. You used to be my favorite month, February, the month of love. My husband and I would celebrate you every year; not for the Hallmark holiday but because it is the annual reminder that we made the jump from being best friends to being best friends in a relationship many years ago in your month. Our dating anniversary was so fun, February, and we loved getting dressed up and eating fancy food to celebrate. Those days seem so care free from the rear view of my life now.

And then 2009 came and ten days after we turned the page from January to you, my world came crashing down. That date is seared into my mind because we were pregnant that day and then we weren’t. We had found out a week before hand that we were having our first child together and, although we were nervous about the awesome responsibility of raising a child, we were excited. After being told we may never be able to have biological children by my doctor early on in our relationship, even taking 8 pregnancy tests (yes, I was, in fact, that girl) couldn’t make us register that we were parents because of the appearance of two pink lines.

We were happy, February. We imagined how our life would change and what we would need to begin to do to prepare our home and lives for a baby. My heart, though, February, was already prepared. I loved our baby more than I ever thought I could love anyone or anything else. I dreamed of our new life and who our baby would look like. I wondered what he or she would be like and if it would be a he or a she. I didn’t care, February. I was SO grateful that we had a baby on the way and I was madly in love. Truly, madly, deeply in love. 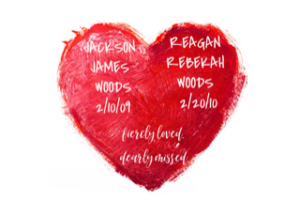 The tenth day of your month in 2009 irreparably changed my life forever, putting me on a parenting journey I never imagined I would be set upon. We went to the doctor that day to get our due date and to hear the glorious sound of our baby’s heartbeat that never would be heard. “I’m so sorry,” the tech told us sadly. “There’s no heartbeat. Your baby died.” The force of those words – no heartbeat – knocked the wind out of me. How could that be, February? Our baby was supposed to be born in 34 weeks… what happened? I fell into my boyfriend’s (now husband) arms in the elevator as soon as we left the office and he held me up while we walked to the car, bawling hysterically, and not being able to make sense of anything. We were given no warning about what would happen; what my body would instinctively know what to do a few short hours later. We weren’t told that we would end up in an Urgent Care with the doctors being worried I would bleed out and asking if I had a blood clotting disorder; something I had never heard of until that day. The love of my life watched as I writhed in pain, calling my boss, calling my parents… calling for help and meds to make the pain stop, feeling helpless and worried he may lose me too. We looked at each other grimly as the medication took hold and I drifted off to sleep shortly before my parents arrived.

Six months later your buddy August stole our joy once more as our second, much loved and wanted baby, died inside of my womb. Only six months after you decimated me, robbed me of the blinders I desperately wanted back to help me through subsequent pregnancies, your pal August decided to do it again. AGAIN. This time was different, yet the same. The words were the same. The experience of losing our baby was slightly different. We were able to be in the comfort of our own home rather than under the fluorescent lights of an Urgent Care when our baby came into this world. She was slightly older than our first babe, but only by a few short days. The pain was the same; the loss, the same. The emptiness and “helpful comments” were the same, yet more profoundly harmful. I hated you, February. And I hated your friend, August.

I turned the page from January of 2010 to you once more and dreaded the year anniversary of losing our baby. Well-meaning friends and family members wanted me to move on. They had, after all. It had been almost a year; how much longer was I going to be sad? Even my boyfriend seemed to have moved on. It was just me, February; just me hanging on to the love and sorrow of my sweet babies that you and August took from me. I made it through the year anniversary and a few short days later found myself staring at two pink lines once more. At last, February, you were going to redeem yourself by providing me with the joy of being pregnant once more! I was so scared, so very scared. But I trotted hopefully back to yet another doctor who told me things looked good one day and two short days later, not so good. My blood work showed that I would lose this baby too, February. And two days after that, I did. Alone. My partner on this gut wrenching, heart sickening journey was sleeping while I lost our baby in our bathroom by myself. We tried to celebrate our dating anniversary that year (even though we were now married) and I will never forget the sadness of sitting across the table from someone I felt I had completely let down and was becoming a stranger due to the oasis of unattended grief between us.

I hated you, February, I hated you for SO long. And I hated myself. You reminded me each year that two of my babies, two babies I loved and wanted so desperately were lost in your stupid month. You reminded me for years that I hated and blamed myself at the deepest levels of my soul because I thought it was my fault. My body kept failing my babies and my husband and my friends and family. I hate you less now; seeing hearts, flowers, those disgusting little heart shaped candies and all the things associated with this month doesn’t send me into a rage. My husband buys me flowers now and I don’t want to throw them across the room any longer. Our marriage is strong, having survived the un-survivable. But my heart still aches, February. It aches at seeing a “9” in the turning of the calendar this year – because it means that it has been ten years since you stole my blinders and innocence about pregnancy. That number feels heavy; it means I’ve been battling you for a long time.

My heart is more anxious than normal over the anniversary of my sweet Jackson, my very first child’s, death. But I know, as I have come to learn over ten years’ experience, that I will turn the calendar page once more and for ten days count down, feeling unsure of when my grief will announce its presence, edgy, and with a heavy, hurting heart. And on that tenth day, I will buy my boy some doughnuts, take them to the cemetery and I will celebrate the little man who made me a mama on his tenth birthday in Heaven. I will feel joy. I will feel sadness. I will likely cry my eyes out as I typically do when no one else is around to judge my tears (or ugly cry face). And in that complicated mixture of emotions I will celebrate one more thing – that you never beat me, February. Sure, you’ve gotten in some good punches. REALLY good punches. There were some days, some YEARS, I wasn’t sure I could continue the fight with you. However, I am the winner of this ten year, epic prize fight because I am still standing. I still have hope. And joy. And ten days after I celebrate Jackson, I’ll take strawberry milkshakes up to the cemetery once more to celebrate Reagan’s 9th birthday. You see, February, I have won the battle and can find happiness within your twenty eight days because your calendar page is where two of my four angels angelversaries are remembered and honored. There are two days out of your month where I don’t have to worry about them being forgotten, or left off the list of my children by others, as typically happens. I stand victorious; the battered and bruised grief prize fighter that I have become, ten years after we began our battle. You’ve lost, old friend; and you’ll continue to this year as well.  I’ll be seeing you soon, February. I’m comin’ for ya.  #winner 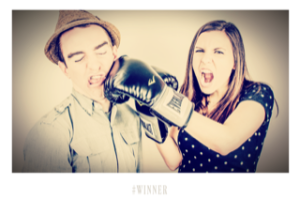