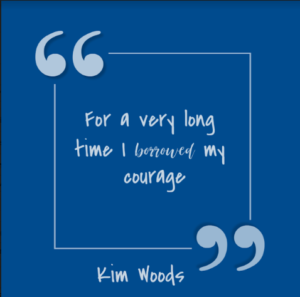 “You are SO strong!”

“You have SO much courage to put your grief out there, I could NEVER do that!”

Sometimes, people tell me these things. They call me strong for what I’ve endured with losing four babes who live in heaven. They call me brave or courageous for being willing to #sayitoutloud, put my vulnerability on display at times and be an advocate for other grieving families. Seriously, the people who say this to me are remarkably kind and generous with their words to me.

But can I tell you a secret? Come close, Grief Warriors, as I admit to you that for a VERY long time – I borrowed my courage. I borrowed that shit for YEARS because for longer than I care to admit, I wasn’t brave. I wasn’t courageous. I was grieving. I was angry. I was brokenhearted. And, quite frankly, I just have a big mouth full of sass sometimes. That’s not bravery so much as a lack of self-restraint. My husband reminds me frequently how powerful my words can be, especially when I’m passionate (also see: fired up, on my soap box, pissed the hell off) about something.

I was raised by parents who valued civility; you don’t have to like everyone, however you are required to be civil with everyone. I have tried to live up to this particular value my entire life, not always well due to me having a big mouth full of sass, but I for sure made a valiant effort at it. However, after Caleb died I became much less thoughtful about my words because the grief had blanketed over this value of my youth and what was left was a gnarled, angry, grieving woman who was done being civil to people who seemed intent on saying things to make my blood boil. I know now that in my raw stages of grief, I did anger VERY well and the lens I viewed people’s words through was one of anger and intentional infliction of pain. At one point, my sister was designated as the person to make the phone call to me to tell me that people had become scared of me and everyone was walking on eggshells because no one knew what would set me off at any given time. It was a fair statement at that point in my grief journey. I didn’t think so at the time and I was SO frustrated with her assessment of who I had become. I was SO frustrated that apparently conversations had been had by people in my life and the collective volun-told my sister to be tribute and be the one to say the words to me. Lucky girl.

The thing is, she wasn’t wrong. None of them were. No one, at that point in my grief journey, could say anything right to me. Some people would try to say something, anything, to let me know that they were thinking about me or cared about my loss but it came out wrong or wasn’t what I wanted to hear so I was pissed. Others didn’t know what to say so they said nothing. I was pissed. Still others had heard through the preverbal grapevine that I was a seething mess of emotions and decided that while they wanted to say something, they would pass until I became more manageable. I was pissed.

See a theme here? I wasn’t courageous or brave to speak my mind unabashedly at that point because it was unfiltered anger that was seething out of my pores. I was angry that people had the audacity to judge how I was handling the loss of my four babies because they had no idea what it took to get up and out of my house every day. They had no idea how exhausting it was to try to pretend I was ok while at work and I felt like an exposed nerve; everything hurt. No one heard my words because of the anger behind them which made me even more angry if that’s even possible. What a cycle.

As time went on and the “when are you going to let this go or move on or stop being stuck?” conversations began to appear, my anger became unmanageable. My anger had become my armor; it made me feel courageous because it gave me permission to speak my mind and not feel concerned with where or on whom my words landed. This, Friends, isn’t courageous. It’s dangerous. So I did the only thing I knew how to do at that time: I took my anger to my grieving mommy mafia. These women are fellow loss moms who had my back no matter what. They knew my anger was justified but were further out on their own journeys and allowed me to begin to trade my unfiltered anger in little by little and borrow some of their courage. One of my mafiosos (is that a word? Did I make that up?) is a gentle soul who lent me her courage to be more gentle with myself as well as others. From her I learned to not jump on someone immediately if they said the wrong things and to give myself grace when I had become an anger ball and needed to ask for forgiveness. Yet another was someone who, like me, did anger very well in her early grief but now channeled that anger to become an advocate for grieving families to own their story and not be afraid to speak their baby’s name, even if it made people uncomfortable. I borrowed her courage of advocacy and finding a way to tell my story without being angry but being firm in that it’s ok to talk about my babies despite what other people thought. Another one of these incredible women had the courage to be completely authentic in her struggles as well as the joy in her good days. I borrowed the courage of her authenticity and began to replace my armor of anger with the armor of authenticity, advocacy and gentleness.

By borrowing courage from my grieving mommy mafia, I began to step into a more integrated life, one where authenticity, vulnerability and grace abound and advocacy was valued. It allowed me to transition from being unabashedly angry to react with justifiable anger when needed. Borrowing courage allowed me to “fake it til I made it” so to speak in that, eventually, that new suit of armor became that of my own courage; not borrowed.

Warriors, sometimes we have to fake it til we make it. Some days, a mask or armor of borrowed courage is required to face this journey. Putting our pieces back together, takes courage. Leaving the house and facing triggers, takes courage. Accepting our new normal, takes courage. But most of all, it takes courage to cast off the yolk of other people’s opinions as to how we do grief, or adoption, or pregnancy after loss or ANYTHING ELSE, and step fully into who we were made to be. The collection of our beautiful scars is woven into our armor of authenticity, vulnerability, and grace and becomes the way we carry ourselves in this world. Hear me well, Grief Warriors: You ARE strong. You ARE brave. You have UNBRIDLED courage to be a part of the club no one wants to be in. I would do anything to know you in any other way besides this… however I’m so glad you’ve brought your courage to our community. We can do this together, Friends… keep going and find your #tbspofcourage – even if it’s borrowed for time. 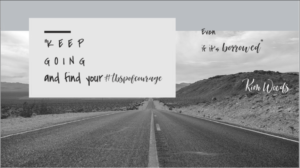