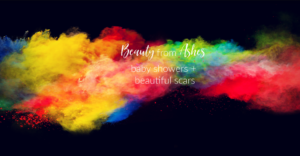 This past week I did something I swore I’d never do again- I attended a baby shower. I hate baby showers. I don’t hate many things, but baby showers are damn near the top of the list of things I detest. Take a breath, friends. Some people hate actual babies- I just hate the showers. And sprinkles. And any variation thereof.

I haven’t been to a baby shower since my own, when I was pregnant with Caleb in November of 2011. That is seven years of no baby shower attendance for me.  After Caleb died I simply couldn’t bring myself to go to another shower, despite the love I may have for the people who have invited me over the years. It has been a steadfast and firm boundary that I’ve needed to have in place for my own mental health and I’ve been consistent over the years that I respectfully decline when asked to attend one.  I hate disappointing people I love by not attending their shower, however I’ve gotten to know my new-normal- self pretty well over the past seven years and, for me, baby showers don’t do my mental health any favors – so I don’t go.

Several weeks ago, my daughter came to me to let me know that one of her biological sisters invited us to her baby shower and she wanted to know if I would go with her. If this was anyone else asking, it wouldn’t have been a question- I wouldn’t have gone. But my grown, adult-child asked me to go with her and this “ask” wasn’t a typical one. Without betraying the confidence of her story, as it’s her story to tell, I will say that my daughter and her biological family have a complex and heartbreaking past. She doesn’t speak to the majority of them; we’ve never met any of them but one up until this past weekend. And the one we do know is who invited us to her shower.

Let me say this: A lot of adoptive parents feel threatened by biological family. It’s a huge reason why people like the idea of adopting babies- they get to control the narrative because there was such a short amount of time the child was with the bios.  I completely understand this inclination because there have been times I’ve felt the tug of insecurity when the subject of biological family is raised by my two older living kids. It’s difficult to describe the feeling of being their actual parent, all the while knowing there are those who came before you to bring these incredible beings into the world. It can sometimes feel like you’re second best; no matter how much you love them, no matter what you do to support them or give them the life they deserve, it won’t be enough because there will always be something you can’t provide them: biology. Genetics. The grounding force of knowing who you are based on where you came from in the very beginning. Adoption, no matter the age, is born from loss and it’s something that weighs heavily on my husband and I’s hearts. It’s the literal definition of beauty from ashes; it’s unfair, challenging, beautiful, broken, redemptive, and messy.

Our oldest is, technically speaking, an adult. I don’t like to say that out loud too often because when I see her I see a wildly capable and incredible being that I want to keep young forever so she’s protected under my watchful eye and doesn’t experience heartbreak and difficulties that the world is sure to bring her. She’s had enough of that in her short 19 years so my inclination is to be hyper vigilant on her behalf in a feeble attempt to keep her wrapped in perpetual safety. Wouldn’t it be lovely if that were truly possible? Alas, she drives a car, has a job, and is a mother (also see: in charge of another human being) so I have to “allow” her to be an adult now. Pouty face for this mama.

My husband and I do our best to be supportive of healthy, mutually beneficial relationships, with both her and our middle child’s biological families. We want them to maintain a connection to their past, if they so choose,  so long as it is in a healthy way and doesn’t cause serious upheaval or chaos for our children, or is with someone deemed “unsafe” due to the back stories of why they were placed into foster care. So with her biological family, we’ve encouraged whatever relationship our daughter would like to have with whomever she feels comfortable with in her past. 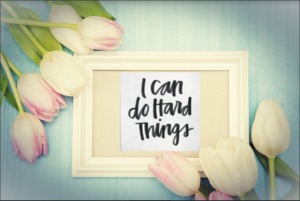 As you can imagine, the complicated shared experiences from their pasts can make biological sibling relationships… challenging. There can be ups and downs, seasons of closeness as well as seasons of needing space to process. It’s difficult to watch from the sidelines, however we are adamant that our daughter make her own choices for these relationships and we base our involvement on her lead. She guides us because her voice and her choice are what’s most important in this instance.

I could tell she was unsure about attending the baby shower because she and her sister had been in a season of not being close and, in addition to that, her other biological sister, whom we’d never met and who our daughter hadn’t seen in over a decade, would be there as well. The two older sisters had reconnected during this season of our daughter not being close to the one sister which had caused some understandable heartache for our daughter. The thought of my “little girl” (who is taller than me because she’s basically a super model) walking into such uncertainty, even as an independent adult-child, made my heart ache. I told her immediately that if she decided she wanted to go to the shower, I would go with her. My chest was immediately tight upon the words leaving my mouth but I knew it was the right thing to do for my girl. I knew that even if it was something unbelievably challenging for me, this was something I could do to help her know that no matter where her wings take her in this world, her roots would always be me and her dad. I can do hard things – And so can she. It’s my job to show her that, so I took a breath and I did.

We arrived at the shower and immediately were greeted by her sisters; I’ll be honest – it was awkward. We glanced at each other uncomfortably with the knowing that despite what happens, we had each other and all would be OK. We walked into her pregnant sister’s mom’s home (she was recently adopted as an adult) to a house full of people we didn’t know. My daughter, someone who abhors small talk and being around people she doesn’t know, took the lead and went to introduce herself to the friends and family members who had gathered to celebrate her sister. I was in awe as I watched her overcome her typical shyness and own that room. I introduced myself to those I didn’t know as well and made my way over to her sister that I hadn’t met, who is my daughter’s spitting image. I shook her hand and introduced myself, tenderly avoiding the words “I’m her mom”, as to not exacerbate any discomfort. As time went on, games were played, laughter ensued, and I watched complicated, pained, relationships take small steps towards healing. I watched my daughter create beautiful scars out of the wounds of her past in real time and there were many times I wanted to bawl my eyes out observing her. In her biological family she is the youngest; in our family she is the oldest. And I watched the “baby” of these three sisters lead the way towards restoration and forgiveness. I watched side bar conversations and pictures of three beautiful sisters be taken; the hope of redemption was palpable in that place. And despite knowing how much work lay ahead to achieve full restoration for those relationships, I smile knowing what a gift that day was as the groundwork to restoration has now been laid.

I still hate baby showers; it’s fair to say I likely won’t attend another until I host one for my daughter if she has another baby someday.  But I am so thankful that I went to this particular shower because a piece of my heart was mended as I watched my daughter construct beauty from ashes. The pride I felt making it through that day myself was dwarfed in comparison to the pride I felt watching my girl  create beautiful scars at a baby shower. 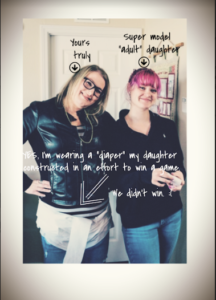